When the University embarked on this impressive £36m development in East London, their priority was to create a flexible, multi-functional facility. Practically, the new space needed to contain hubs that centralised administrative departments and forums where students could gather in social and productive group study zones. The new building also demanded an imaginative design solution that would inspire and meet expectations, especially those of PhD and postgraduate students, some of whom are already working in a professionalised world.

The University invited bids for the design of the Graduate Centre which would occupy an underused site to the rear of the existing Engineering Building and the historic Grade II listed, People’s Palace and Octagon buildings. Rather than a conventional tower design, WilkinsonEyre’s winning concept utilised the same amount of space horizontally, repairing the backs of buildings and creating a new rear face for the city block which had become a thoroughfare and service road.

“Because the Graduate Centre is backing up against other buildings, it couldn’t have a deep plan. It had to work more in one direction. We needed a wider depth for the lecture theatre, so it flares out at one end, while the boomerang shape follows the contour of these buildings behind but also helps break up the length inside and outside.”

The Graduate Centre accommodates central administration for the doctoral college, special study rooms and areas for postgraduate students, a café, Harvard-style lecture theatre and an events space. It is also home to the School of Economics and Finance. The front of the building is characterised by two glazed bands at lower and upper levels for student social and meeting spaces. These sandwich three floors of the more cellular academic offices, articulated with bricks and smaller windows.

Zero, a new brick system from Vandersanden, was WilkinsonEyre’s material of choice for the external walls of this 80m-long, seven-storey ground-scraper. The use of brick draws attention to the horizontality of the building’s volumes and also blends with neighbouring buildings, including the rear of the People’s Palace and nearby Octagon.

Zero offers a contemporary joint-free appearance. Instead of being pointed up to the face of the bricks, the mortar is set well back, with rainwater draining behind. Although the Graduate Centre is surrounded by brick buildings, it retains a distinctive yet contextually sympathetic appearance thanks to the use of three different brick band tones. The lower level is a pearl grey (named Quartis), a darker, mid grey is used in the middle band (Platina) and yellow for the top (Crème). The effect, when combined with the champagne coloured glazing frames, gives the Graduate Centre a delicate and soft appearance, despite its size.

Where the three brick volumes oversail another, WilkinsonEyre has designed brick slip soffits, also manufactured by Vandersanden. These make the different layers feel like solid, almost independent, elements. Here, WilkinsonEyre devised a system with contractor Bouygues whereby the slips are bonded together in runs of 10-15 onto tongue and groove planks that are, in turn, interlinked and fixed up to the steel substructure. The detail is particularly beautiful where the different planes feather together at the corners or at the bend in the boomerang form.

The scale of this huge 7700m2 building is, thus, carefully diluted in five stacked volumes that shift back and forth from the building line with a careful composition.

Throughout the project, Vandersanden provided comprehensive technical support, including on-site workshops to assist the contractor and the architect in specifying and working with the Zero system and the brick slip soffits.

The Graduate Centre at Queen Mary University is the perfect demonstration of how innovative brick systems can help architects deliver playful, versatile and inventive solutions, with the capacity to fit both boldly and seamlessly within their setting into their environment whilst inspiring the next generation. 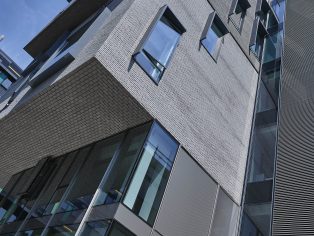