The latest and last phase of the £25 million project to restore the Grade 1 listed, Guildhall Complex in Swansea, is the £6 million refurbishment of Brangwyn Hall, a popular centre of social and cultural life in Swansea, located within the Guildhall.

Advanced specification TECTUS fully concealed hinges have been used on a set of stage doors allowing a lift to operate and bring items up from storage beneath the building. The design of the stage door placed high demands on the door fittings, the weight of the doors required heavy duty hinges, 300 kg per door leaf. Three TECTUS TE 645 3D have been fitted per door leaf with the hinges fixed to machined steel blocks built-in directly to the steel box. The concealed hinge allows the stage door to be completely flush without impacting on the design.

Carl Bennett of Engineering and Fabrication, the Door/Frame Manufacturer commented:

“As the doors had to be perfectly square, with 3 hinges per side and would have to be craned into position due to the weight, we decided to set it up in our works and trialled them here before moving the doors to the building. All worked out well with the SIMONSWERK TECTUS hinges working fine and now operating very smoothly.”

The Guildhall was opened on 23 October 1934, and has played a central role in the lives of the people of Swansea ever since. It has functioned as the focal point of local government and justice and is the centre of civic ceremony and enjoys iconic status in the city after surviving the Blitz during World War II. 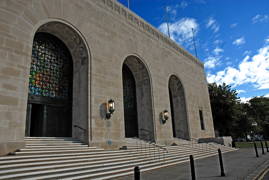