The new hotel, congress and concert complex Malmö Live designed by Schmidt Hammer Lassen architects is nominated for the Kasper Salin Prize 2015 – Sweden’s most prestigious architectural prize. The complex totaling 54,000m2 opened in May of this year and is fast becoming a cultural landmark in Malmö, Sweden.

Malmö Live is situated in central Malmö and appears as a clear and easily readable composition of buildings. Inside, three volumes hold a large symphony hall, a flexible hall and a conference centre, which are clearly defined elements that, through their mutual composition, set the tone for the musicality of the building. The three building masses have an almost-urban scale that supports the idea of ‘a city within the city’, which is the key design concept of the complex.

The Kasper Salin Prize is awarded annually by the Swedish Association of Architects to a Swedish construction or group of buildings of high architectural class. It is considered the most prestigious of its kind in Sweden. The winner will be announced on November 19, during the Architecture Awards in Stockholm. Recent winners include both Swedish and international names, such as Snøhetta, Tham & Videgård, Wingårdhs, Ralph Erskine and Rafael Moneo.

The prize has been awarded since 1962 and was founded by the Swedish city architect of Stockholm, Kasper Salin (1856-1919). 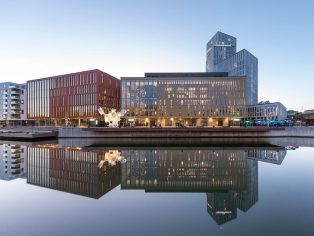