James Parker visited the White Collar Factory in east London to discover how the architects stripped the building back to its bare essentials to harness concrete’s maximum performance, as well as its aesthetic qualities

Since it opened last spring, the White Collar Factory, part of the Old Street Yard complex on Old Street’s ‘silicon’ roundabout in east London, has been justly celebrated not only for its rooftop running track but as a set of buildings which offers high-end sustainability via a stripped back and focused design. A considered embracing of unadorned concrete is the key component of architects Alford Hall Monaghan and Morris’ approach and one which adds immensely to the building’s overall aesthetic.

By exposing the concrete soffits, the benefits of thermal mass have been fully realised, providing a natural, comfortable atmosphere for staff to work in.

The White Collar Factory also features in-slab water cooling, and there are five additional low-rise buildings around a public courtyard, all of which have their concrete frames exposed inside and out. It is the “connecting element” running through the scheme, as project architect Adam Burgess tells ADF.

The development is fully let, with tenants including design software king Adobe, structural engineer AKT II, and office space provider The Office Group, with the latter fitted out by AHMM to provide an exciting flexible co-working space.

The mini-tower represents a new type of development that takes its cue from the multi-level factory typology so beloved of tenants occupying renovated former industrial space across London. Due to there being no suspended ceilings, with all ductwork and electrical services exposed, the floor to soffit heights are 3.45 metres, significantly more generous than traditional speculative office buildings.

According to Adam Burgess, this project is distinguished by its having taken the factory style approach to its ultimate conclusion with “services, structure and facade working together in both form and function, removing excess from the building and doing more with less”.

There is a strong trend for exposing soffits and ductwork, in this case however it has not been done to follow fashion, but chiefly to strip the building back to basics in order to optimise performance. In tandem with this, the designers have meticulously set out services in order to achieve an architecturally ordered visual result.

While Burgess says the trend for exposed services has in many cases “become ornament,” here AHMM have stripped the building back to the necessities with traditionally hidden functional items such as ventilation and sprinkler runs becoming an integral part of the architecture. “Therefore,” he says, “it was important that we co-ordinated and controlled the setting out, even down to conduits.”

This painstaking approach extended to the board-marked concrete exterior, which expresses the nature of its construction, giving an “honest, process driven finish”. Says Burgess, “By understanding the concrete construction process and the impacts this had on the final product, we could pragmatically set out key elements such as tie holes, construction joints and pump positions within the formwork, so when struck the final finish was co-ordinated and coherent” The effect of this is to break up the exterior and add character and interest.

“We understood all the elements that were going to scar the concrete, but decided early on that we wanted to work with these elements rather than fight against them.” AHMM set a demanding brief to contractors on attention to detail:

“We were aware of the commercial realities of delivering so much exposed concrete, so it was important to work with the subcontracting teams to focus on controllable elements such as setting out and workmanship.”

On close inspection, the natural imperfections of the concrete process are evident, with honeycombing, grout loss and movement joints all visible. Burgess explains: “With high-finish concrete you might seek to remediate these minor defects, but with this, it was a case of saying this is part of the character of the concrete, so let’s go with it. We wanted an honest and characterful finish.”

The result is a moderated, elegant combination of precise concrete forming, with an unfinished aesthetic – the best of both worlds, exemplified in the massive 1200 mm solid concrete column holding up the reception soffit. “The rigour is in the workmanship and process, not the finish,” says Burgess.

The design team had to achieve a fit for purpose material which could also be poured quickly and efficiently by the contractor. “It had to be commercially applied because it’s a large speculative development, and not a small scale bespoke resi project.” Including recycled ingredients for sustainability goals meant hitting a delicate balance to maintain efficiency and the desired aesthetics. Says Adam: “We wanted a fairly warm colour, and had to experiment with the mixes and how the cement substitutes affected it” – testing included creating a series of large scale mock-ups that experimented with formwork.

The finished concrete has a warm tone close to that of the white-oiled rough sawn timber it is paired with in reception areas to the low-rise buildings and the floor of the Factory’s reception. The architects wanted a natural board-marked finish, however the traditional timber shuttering approach was not commercially practical due to the jumpform construction method being used meaning timber would be wasted and excess time spent.

AHMM worked with a timber merchant and concrete formwork maker Reckli to create a bespoke silicone mould which had “just the right amount of texture to not look like a caricature of timber, but would give a natural finish.” Adam Burgess says that the focus was on “working with the process to get the most out of it.”

While the formwork needed to be changed slightly at different levels, the bespoke liners could be reused, making it much quicker and easier.

The project has achieved BREEAM Outstanding with a score of 94 per cent, as well as LEED Platinum, and is targeted to save 25 per cent of the energy of a standard spec office.

Reaching the high sustainability standards meant employing a range of passive strategies, beyond harnessing exposed concrete’s thermal benefits. For example perforated metal panels act as brise soleil and the percentage of glazing varies depending on the elevation to control solar gain, with glazing restricted to the south and increased to the north.

However in-slab cooling, still “relatively new to this country,” says Burgess, forms a key part, the soffit cooled with embedded water pipes. He says there have only been a “handful” of buildings so far in the UK, which have all been somewhat smaller than the White Collar Factory.

The concept is simple but effective. The concrete’s thermal mass maintains the temperature of the internal environment with a much higher efficiency than traditional air conditioning or fan coil units.

However if it does get too hot in summer months, occupants used to traditional spec office buildings have been pleased to discover that here they can tweak their environment. They can open windows (if a ‘traffic light’ on their floor tells them it’s OK to do so) or switch on local trench heaters and coolers.

Burgess believes strongly in the longevity of concrete as part of its sustainability case. “You can crush and reuse it, but it’s also going to stand the test of time, it’ll still be there in 200 years if needed. It has the permanence that many modern materials lack”.

The architects are justifiably proud of this project as a high-profile example of the power of exposed concrete’s aesthetics as well as its performance. He states: “It is an amazingly versatile material. If you are prepared to expose it, work with it and understand it, it has so much inherent variety and texture – if done properly, it can be quite beautiful.” 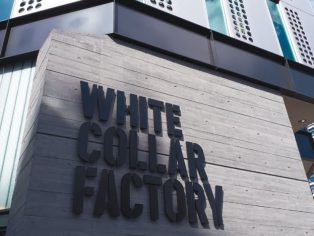 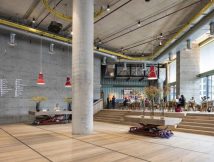 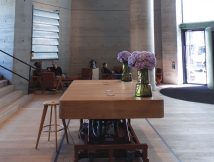 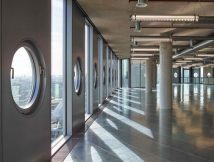